To the families, patients, and friends of A-Ha Vision,
Recently the provincial government lifted many of the mask mandates. Until further notice, we are continuing to require everyone entering our clinic to wear a mask at this time.
Please continue to bring your mask with you to all appointments. We apologize for any confusion this may have caused and we will continue to provide updates with your safety in mind.

Meet our optometrist, Dr. Shirley Ha, in Oakville, Ontario. We're dedicated to optimizing your vision and we invite you to See the Difference! 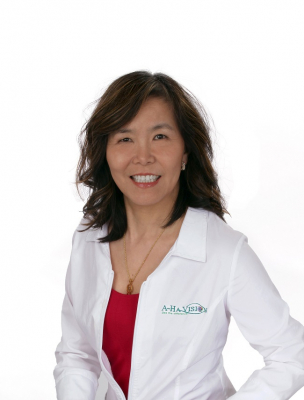 Dr. Shirley Ha earned her Honours Bachelor of Science and Doctor of Optometry degrees from the University of Waterloo in 1990 and completed an Ocular Diseases and Primary Care externship at the Hospitals of Yau Ma Tei and Prince of Wales in Hong Kong. She received accreditation to prescribe Therapeutic Pharmaceutical Agents (TPAs) in the treatment and co-management of ocular diseases from the Northeastern State University - Oklahoma College of Optometry in 1995 and re-certification from Nova Southeastern University - Florida College of Optometry in 2009.

Dr. Ha is a Fellow of the College of Optometrists in Vision Development and is a candidate for FNORA. She is one of the founders and served on the Executive Board of Vision Therapy Canada, a non-profit organization that provides vision therapy education to optometrists and raises awareness of vision therapy and rehabilitation through public and government advocacy across Canada. She currently serves on the Advisory Board at the Neuro-Optometric Rehabilitation Association.

Dr. Ha has a special interest in pediatric eye care and binocular vision abnormalities. Her interest in both developmental and neuro-rehabilitative optometry took her on a path of continuing professional development to include the core clinical curriculum from Optometric Extension Foundation Program, Neuro-Visual Processing Therapy from the Padula Institute of Vision and Rehabilitation, Skills Development Program from the Neuro-Optometric Rehabilitation Association, Syntonics Phototherapy from Dr. Stefan Collier of Switzerland and from the College of Syntonic Optometry and other vision therapy and habilitation/rehabilitation education from around the world.

Dr. Ha is a member of the Ontario Association of Optometrists (OAO) as well as the Canadian Association of Optometrists (CAO). She believes true professionalism means giving back to the profession that has supported and helped her. She served on the OAO Board of Directors from 1999 to 2004 and as President in 2004-2005 and is forever grateful for the priceless experiences gained and the countless volunteers she met during her tenure. Her accolades include the OAO President's Award in 2007 and the OAO Public Education Award of Merit in 2012.

In Dr. Ha's Own Words

What is Dr. Ha's goal as an optometrist?

“To give patients of all ages the gift of vision beyond healthy eyes and 20/20 eyesight and afford them every opportunity to see and succeed in life.”

What would Dr. Ha like parents to know about their child's vision?

So by introducing a child as early as possible to an eye exam, they get that experience of what is expected, of what should be the norm.

And then when their vision does go outside normal limits, then the child can say, 'Hey, mom, that's getting fuzzy now,' or 'I'm seeing double.' They're more aware of their own eyes and vision.

Your child might be a very intelligent person, but be severely held back in school by poor vision. Their perception that they're not smart is because they have so much trouble getting visual information into their brain, and just don't know it."

A-Ha Vision provides innovative vision therapy services to patients from in and around Oakville.